All dere East kin, be what you may,
to Rex and Regina lean touward
as not to lack in this display –
of  goodnesse above reward
to one whose labors never stored,
is yeve frely even yet
by Ramesgate’s lady, muchel adored.
One selden isei3e and not for3ete.

Here manner of joy alle can see,
A smile ever on hire lips doth dwell.
None but Our Lucie may this be.
How gretly Lovegood fits her well,
All unquiet doeth she cwellen,
with alle in ease as quire well sete,
work wol soun withe harmonie of a belle
A gift selden isei3e and not for3ete.

King Darius Aurelius Serpentius
and Queen Etheldreda Ivelchyld,
on the feaste day of St. Amabilis
at the Malagentiaes Greate War wild
wolde decre in newe ink styled
In the  societies fiftith year We set
our honor on sheo which all beguiled
She who oft  isei3e and not for3ete.

Thus we Grant Arms to seo who liht girt,
Who lessens burdens oft, without relent,
Per bend sinister azure and vert,
a stag springing within a bordure argent.
By Our full right and Our intent
We sete on heo head fyne coronet
& with this title we cement
Lucie Baroness, selden isei3e and never for3ete.

Illumination and calligraphy were done by Master Ed MagGuyver.
About this piece:

This poem is based on the poem from 1377 “The Death of Edward III” which was somewhat period appropriate for Lucie’s persona period, the political situation in 14th century England, and her location of Ramsgate in Thanet. I have to thank Master Angus Pembridge (Ian Stewart) for directing me toward this work when I was in a fit about what to do, having been not as successful as I had hoped in identifying a poem with my desired time period and geolocation for Lucie’s piece. He suggested this as a good compromise and it was a good place to aim.

The rhyme scheme is ABABBCBC with a repeated end line with some variance in tense and structure but constant theme and word style (the C is the same rhyme throughout the poem.) The original does not have a particular cadence and that has followed in this poem. The original has many stanzas but this one only four.

Special challenges were working the heraldry in – which will not be included in the actual scroll as it has not yet passed – and finding appropriate rhyme for “Serpentius” which proved an odd challenge (I looked for appropriate Latin phrases and words to use but came up short). I always try to make “the necessary” information part of the whole work. The Great Northeastern War is merged with the location of the event, Malagentia, and the day is listed only as the Saint Day it references (July 11 is the feast day of St. Amabilis) which may give some herald fits, but it’s all in there.

(St. Amabilis died in 634 and is also known as St. Mabel. Traditionally identified as the daughter of an Anglo-Saxon king, she became a nun at Saint-Amand in Rouen, France. Selected for both her feast day and her connection to England, I also thought Lucie might just like her. A second saint, a male, from an earlier time, shares the name. He, like me, was a church cantor and I liked the connection. Worth noting – she’s listed in the 600+ page tome about saints that was published by the Monks of Ramsgate. There are no coincidences!)

I reached out to the King and Queen and got statements from each of them as to why they wished to give Lucie this award. I incorporated their sentiments, if not their direct quotes, into the piece.

The result is a custom poem in a persona-appropriate verse style in which all the information is woven in the form.

I used http://www.etymonline.com/index.php to help me check the words to see if they existed before 1500 and made alterations when I could use an earlier word.

Some of the original:

A ! dere God, what may this be,
That alle thing weres and wasteth away?
Frendschyp is but a vanyte’
Unnethe hit dures al a day.
Thei beo so cliper at assay,
So Leof to hand, and loth to lete,
And so fikel in heore fay,
That selden isei3e is sone for3ete

Sum tyme and Englis schip we had
Nobel hit was, and heih of tour ;
Throw al Christendam hit was drad,
And stif wold stonde in uch a stour,
And best dorst byde a scharp schour,
And other stormes smale and grete ‘
Nou is that schip , that bar the flour,
Selden sei3e and sone for3ete.

Into that schip there longeth a roothur,
That steered the schip, and governed hot ;
In al this world nis such another,
As me thenketh in my wit.
Whil schip and rothur togeder was knit,
Thei dredde nother tempest, druy3e nor wete ;
Nou be thei bothe in synder flit ;
That selden sei3e is sone for3ete.

3 = yogh which can be transcribed “gh” or “y,” and is printed ȝ  / ȝ
http://en.wikipedia.org/wiki/Scribal_abbreviation

Using the 1377 “On the death of Edward III” as the rhyme and form basis of this piece. The original documents are from the British Museum collection. The version in print I used as a reference was http://lollardsociety.org/pdfs/Wright_PoliticalPoems_vol1.pdf 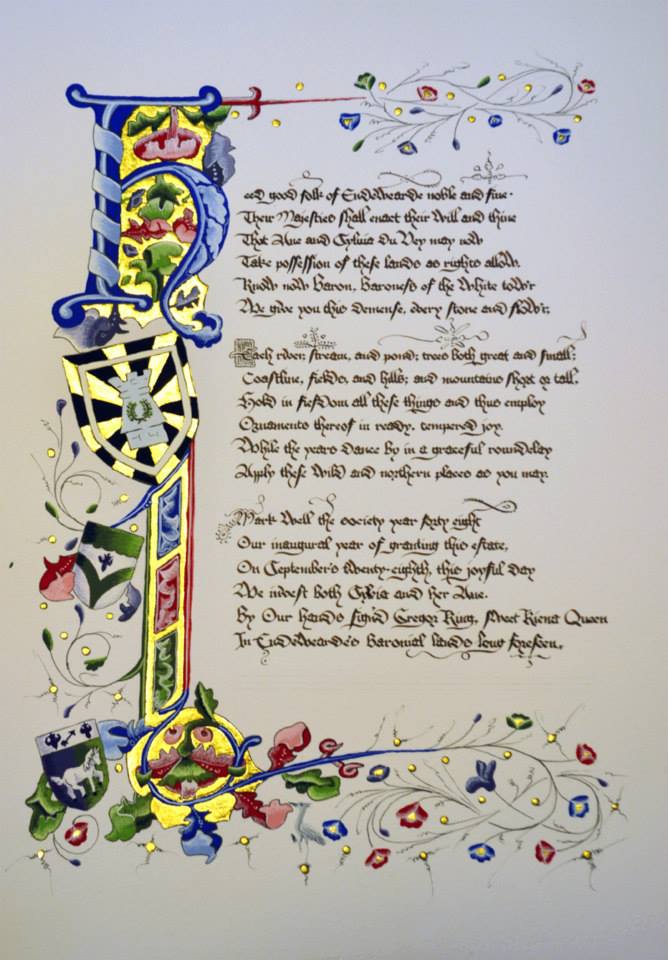 Heed good folk of Endewearde noble and fine –
Their Majesties shall enact their will and thine
That Ane and Sylvia du Vey may now
Take possession of these lands as rights allow.
Know now Baron, Baroness, of the white tow’r
We give you this demense, every stone and flow’r,

Each river, stream, and pond; trees both great and small;
Coastline, fields, and hills; and mountains short or tall,
Hold in fiefdom all these things and thus employ
Ornaments thereof in ready, tempered joy.
While the years dance by in graceful roundelay
Apply these wild and northern places as you may.

Mark well the society year forty eight
Our inaugural year of granting this estate,
On September’s 28th, this joyful day
We invest both Sylvia and her Ane.
By Our hands sign’d Gregor King, sweet Kiena Queen
In Endewearde’s Baronial lands long foreseen.

About
Each line is a painful 11 syllables, which is the form from which was a request from the calligrapher: “It would be a huge bonus if the words were in metered verse (I can’t tell how many syllables per line, between 9 and 11?) split into three “equal” parts like the example , but definitely not required. I know that adds a lot to the complexity.”